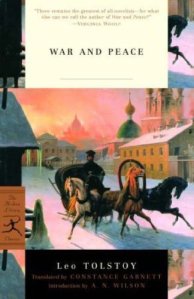 The day I thought would never come finally did.  Last night I finished War and Peace.  I started it back at the beginning of May.  I would set it aside for weeks at a time while I read other books.  But slowly I trudged through the book.  And I’m glad I did.

The book follows the lives of 3 (allegedly 5, but really it focuses on 3) families from 1805-1812 (and then jumping ahead to 1820 in the epilogue) during Napoleon’s attempt to conquer Russia.  There are quite a few peripheral characters, but it wasn’t hard to become invested in the main characters.  Natasha’s story fascinated me the most at first, but later it was Pierre’s as well as Princess Marya’s stories that kept my attention.  I can’t say that I loved any of the characters, but I did enjoy them.  The length of both the novel and the time period it covers allowed for all the characters to grow and change and become very different people than they were when I first met them.

It was the story that I enjoyed.  I could have done without some of the military explanations and philosophical digressions (basically boiling down to the free will of men vs the predetermined nature of history).  It was these sections that slowed me down (I did not react well when I discovered the last 40 pages read like a philosophical treatise).

This book is unlike any other novel I’ve read (even Anna Karenina).  Possibly because it’s less than a novel.  Stories wrapped up but didn’t end.  Characters grew but never achieved all that they could.  The Russians won, but not really.  Still, it was a fabulous piece of literature.  It captured the Russian spirit.  It showed how even under the threat of impending doom, Russians will not give in.  Even when their greatest city is occupied, they will not assimilate.  They remain their own individual people and this perseverance is what captivates the reader.

Send to a friend

A very refreshing morning at a very lightly populated beach with friends we have missed a lot since they moved away.
#blackouttuesday I hope to share and amplify the voices of others instead.
Instead of a normal monthly wrap up, I want to recommended some books for this moment instead. As we stand with the Black community and fight against racial injustice, we can also read Black stories, learn about the history we may have missed in school. and examine our own biases.
First day/Last day. This was certainly not the end to VPK and second grade we imagined but we made it nonetheless.
Happy birthday to our brand new EIGHT-year-old today.
Evan will be 8 on Tuesday. We weren’t able to throw him a big birthday party this year (honestly, I am probably more disappointed than him) so we decided to do something we normally can’t and gather all of his grandparents, aunts, uncles, and his baby cousin across 6 different states on a Zoom call to celebrate. We played a few games and sang happy birthday and opened gifts. Evan asked for a very specific homemade cake and was thrilled with it. And Evan truly seemed to enjoy the virtual party. I wish I could have dozens of kids splashing around in my pool right now but I can’t and that’s okay. We are still finding ways to make special things special.