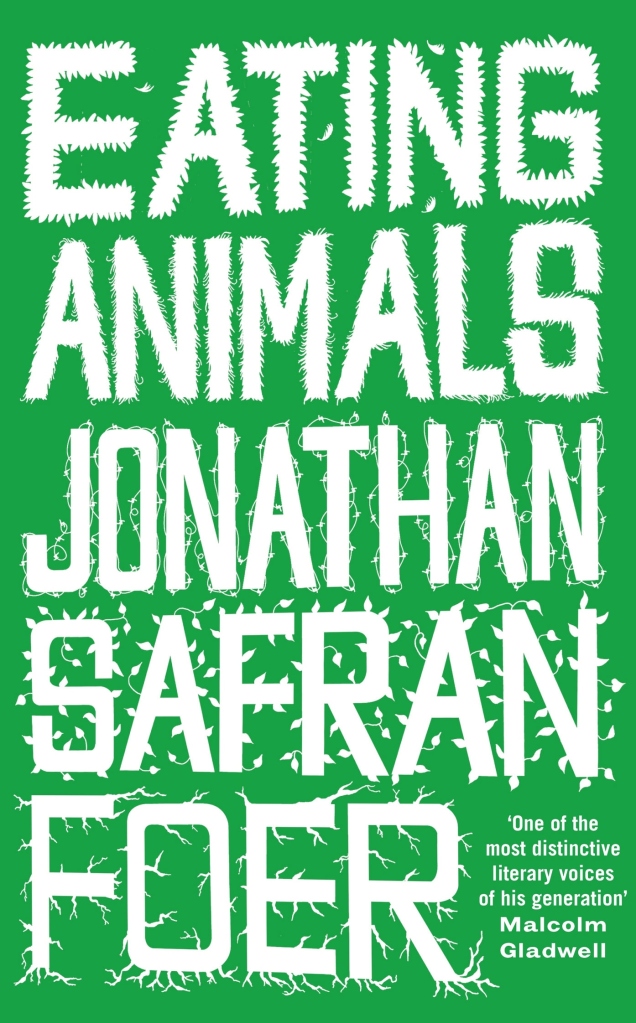 Summary (from Barnes and Noble):

Jonathan Safran Foer spent much of his teenage and college years oscillating between omnivore and vegetarian. But on the brink of fatherhood-facing the prospect of having to make dietary choices on a child’s behalf-his casual questioning took on an urgency His quest for answers ultimately required him to visit factory farms in the middle of the night, dissect the emotional ingredients of meals from his childhood, and probe some of his most primal instincts about right and wrong. Brilliantly synthesizing philosophy, literature, science, memoir and his own detective work, Eating AnimalsEverything is Illuminated and Extremely Loud and Incredibly Close, widely loved, Eating Animals is a celebration and a reckoning, a story about the stories we’ve told-and the stories we now need to tell. explores the many fictions we use to justify our eating habits-from folklore to pop culture to family traditions and national myth-and how such tales can lull us into a brutal forgetting. Marked by Foer’s profound moral ferocity and unvarying generosity, as well as the vibrant style and creativity that made his previous books,

Other Books I’ve Read By Author: Everything is Illimunated

Why I Picked Up This Book: Like Foer, I’ve struggled with the decision to eat meat so I thought his book would be what I needed.

I often recommend a book because I think others will enjoy it. This is not a book you enjoy. It’s a book you need to read in order to make the important moral, environmental, and health decisions involved every time you eat meat. I don’t intend to be preachy. I simply feel that ignoring the truth is worse than making the informed decision to continue eating meat. Like Foer, who says this book is not an attempt to turn everyone into vegetarians, I don’t really care what anyone’s ultimate decision is – I just want everyone to have all the information before they make it.

Prior to reading this book I was a partial vegetarian. I discussed my philosophy here. I am now a complete vegetarian. After reading this book, I simply can’t eat animals any longer. At least not the way they are “farmed” and slaughtered in 21st century America. And I thought I was doing something good buy not eating beef or pork, but it turns out poultry really gets the worst treatment. Chickens may not have the “soulful eyes” of pigs or cows, but they’re certainly living creatures that deserve at least some respect for being such.

Most people don’t want to know the things Foer discusses in this book. People want to be blissfully unaware of what brought that piece of bacon to the breakfast plate. But I think if we are going to factory farm animals and then inhumanely slaughter them, the least we can do is acknowledge our role in the process.

I’m going to post quite a few memorable passages because I think they capture the essence of this book better than any review I give it can. I’m not going to give you all of the enlightening facts (go look up fecal soup), but please, consider reading this book or another like it or at least doing a little research before eating your next chicken wing or hamburger. Or at the very least watch the Colbert Report interview below.

“But there is something unique about the ways in which we fall in love with animals.” 22

“Isn’t it strange how upset people get about a few dozen baseball players taking growth hormones, when we’re doing what we’re doing to our food animals and feeding them to our children?” 112 (Frank Reese, poultry farmer)

“We perhaps know more than we care to admit, keeping it down in the dark places of our memory – disavowed.” 143

“…the food – how it tastes, the functions it serves – either does or does not justify the process that brings it to the plate.” 164

“Since I encountered the realities of factory farming, refusing to eat conventional meat has not been a hard decision. And it’s become hard to imagine who, besides those who profit from it, would defend factory farming.” 196

“We can’t plead ignorance, only indifference.” 252

Will I Read This Author Again?: Yes

A very refreshing morning at a very lightly populated beach with friends we have missed a lot since they moved away.
#blackouttuesday I hope to share and amplify the voices of others instead.
Instead of a normal monthly wrap up, I want to recommended some books for this moment instead. As we stand with the Black community and fight against racial injustice, we can also read Black stories, learn about the history we may have missed in school. and examine our own biases.
First day/Last day. This was certainly not the end to VPK and second grade we imagined but we made it nonetheless.
Happy birthday to our brand new EIGHT-year-old today.
Evan will be 8 on Tuesday. We weren’t able to throw him a big birthday party this year (honestly, I am probably more disappointed than him) so we decided to do something we normally can’t and gather all of his grandparents, aunts, uncles, and his baby cousin across 6 different states on a Zoom call to celebrate. We played a few games and sang happy birthday and opened gifts. Evan asked for a very specific homemade cake and was thrilled with it. And Evan truly seemed to enjoy the virtual party. I wish I could have dozens of kids splashing around in my pool right now but I can’t and that’s okay. We are still finding ways to make special things special.