Today I’m doing something a little different. I called this a discussion because The Death of Ivan Ilyich by Leo Tolstoy wasn’t really a book I felt I could “review.” Today my books. my life. is the stop on the Imperial Russian Literature Classics Circuit tour (hosted by Rebecca Reid). I adore Russian literature so I jumped at the chance to participate in this tour. However, I’m currently in fear of large novels. Thankfully, I had a copy of The Death of Ivan Ilyich waiting for me on my shelf. This is very different from Anna Karenina and War and Peace in substance as well as length and reads as more of a philosophical writing than a story. So today we dive into a discussion on the topic of death and dying as viewed by The Death of Ivan Ilyich.

(I realize many of my regular readers will skip this post but I hope to catch the attention of a few other Russian lit enthusiasts like myself). 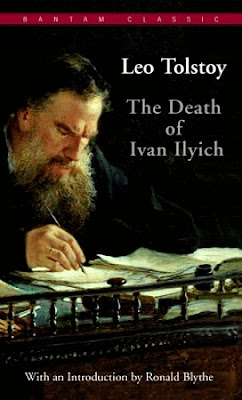 The Death of Ivan Ilyich begins with the actual death and then backtracks to briefly tell the story of Ivan Ilyich’s life before focusing on the very end of it. Ivan Ilyich led the life he was supposed to lead. He was properly educated and then worked is way up is professional career. He had a wife and kids and worked tirelessly to maintain the appearance that he was successful. It was in maintaining this appearance that he had a slight mishap on a ladder that led to the bulk of the book – his dying.

At first, Ivan Ilyich seems unaware that he is actually dying. He goes to doctors and tries various remedies but when nothing works he begins to despair. And though the pain is great, it is the loneliness that overwhelms him. For the first time in his life, he must face something completely alone.

“There was no deceiving himself: something new and dreadful was happening to him, something of such vast importance that nothing in his life could compare with it. And he alone was aware of this. Those about him either did not understand or did not wish to understand and thought that nothing in the world had changed.” p.80

“And he had to go on living like this, on the brink of disaster, without a single person to understand and pity him.” p.83

As his illness progresses, there is a moment when he realizes he is dying.

“Before there was light, now there is darkness. Before I was here, now I am going there. Where?” p. 88

But it is still impossible for him to accept.

There is a discussion of the syllogism: “Caius is a man, men are mortal, therefore Caius is mortal.” This logic is lost on Ivan Ilyich as it is, I assume, lost on most of it. While the average person understands that everyone dies, and that he or she will die as well, do we ever completely accept that fact and understand it? I’m reminded of the Rosencrantz’s monologue in Rosencrantz and Guildenstern are Dead (the movie version):

Do you ever think of yourself as actually dead, lying in a box with the lid on it? Nor do I really. Silly to be depressed by it. I mean, one thinks of it like being alive in a box. One keeps forgetting to take into account that one is dead. Which should make all the difference. Shouldn’t it? I mean, you’d never know you were in a box would you? It would be just like you were asleep in a box. Not that I’d like to sleep in a box, mind you. Not without any air. You’d wake up dead for a start and then where would you be? In a box. That’s the bit I don’t like, frankly. That’s why I don’t think of it. Because you’d be helpless wouldn’t you? Stuffed in a box like that. I mean, you’d be in there forever. Even taking into account the fact that you’re dead. It isn’t a pleasant thought. Especially if you’re dead, really. Ask yourself: if I asked you straight off I’m going to stuff you in this box now – would you rather to be alive or dead? Naturally you’d prefer to be alive. Life in a box is better than no life at all. I expect. You’d have a chance at least. You could lie there thinking, well, at least I’m not dead. In a minute, somebody’s going to bang on the lid and tell me to come out. (knocks) “Hey you! What’s your name? Come out of there!”

Even after admitting that he can’t understand it, Rosencrantz continues to state that he wouldn’t like being in a box. It is impossible for us to completely understand death – we imagine ourselves alive in the box, but being dead makes all the difference. Does this prevent us from ever completely accepting our own demise?

When we are healthy, we can shield ourselves from the inevitability of our death. By facing death so closely, Ivan Ilyich can no longer do this.

“He tried to revert to a way of thinking that had obscured the thought of death from him in the past. But, strangely, everything that had once obscured, hidden, obliterated the awareness of death no longer had that effect. Ivan Ilyich spent most of this latter period trying to recapture habits of feeling that had screened death from him.” p. 94

He finds comfort in one person – the pantry boy, Gerasim. Gerasim will hold Ivan Ilyich’s legs up on his shoulders and listen to him speak because it gives Ivan Ilyich some comfort. I found this an interesting idea. Gerasim literally and figuratively holds Ivan Ilyich up.

While dying, Ivan Ilyich longs to be treated as a child.

“He wanted to be caressed, kissed, cried over, as sick children are caressed and comforted.” p. 104

And why shouldn’t he long for this despite his “graying beard.” Death brings us as far from our birth as possible yet there are aspects that remarkably similar.

The book then moves on to a discussion of living the best life possible. Ivan Ilyich is plagued by doubt and regret that he did not life the correct life because he lived the life he ought.

“It’s as though I was going steadily downhill while I imagined I was going up. That’s exactly what happened. In public opinion I was moving uphill, but to the same extent life was slipping away form me. And now it’s gone and all I can do is die!” p. 120

“‘Perhaps I did not live as I should have,’ it suddenly occured to him. ‘But how coudl that be when I did everything one is supposed to do?'” p. 120

Yet he waivers back and forth with this idea.

“And when it occured to him, as it often did, that he had not lived as he should have, he immediately recalled how correct his whole life had been and dismissed this bizarre idea.” p 120

Though his death is a painful one, it is harder on him mentally than it is physically. He struggles with the idea of death throughout.

“The doctor said his physical agony was dreadful, and that was true; but even more dreadful was his moral agony, and it was this that tormented him most.” p. 126

Finally, after the agonizing time spent dying, Ivan Ilyich faces death up close and is no longer afraid.

“‘And death? Where is it?’ He searched for his accustomed fear of death and could not find it. Where was death? What death? There was no fear because there was no death. Instead of death, there was light.” p. 133

It is not until the moment of death that Ivan Ilyich is finally able to fully embrace its inevitability and accept it. And I think Tolstoy gets it right here. We will never understand it while we are alive. It is something that must be experienced and that is what makes it so frightening.

I mean, even after reading this, I still believe that I am NOT Caius. Don’t you?

Has anyone else read this? I am done rambling and I’d love to hear your thoughts in the comments.

Oh, and don’t forget to check out the rest of the Imperial Russian Circuit. You can find the list here.

11 thoughts on “The Death of Ivan Ilyich [Book Discussion]”