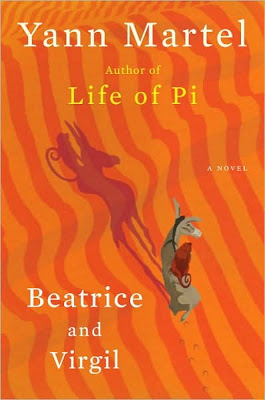 I read Beatrice and Virgil almost two months ago. I may be behind on reviews but I generally manage to get one up by now. I have struggled with what to say about Beatrice and Virgil. I’m still not sure what I think about the book. But review it I must, so here you go.

I can’t fault the writing. Yann Martel is certainly very good at that. There are some beautiful passages:

“The meeting had an intimate quality; two strangers were coming together, but to discuss an external matter, a faith object that had moved them both, so all barriers fell. This was no place for lies of bombast.” p. 4*

“Colonialism is a terrible bane for a people upon whom it is imposed, but a blessing for a language. English’s drive to exploit the new and the alien, its zeal in robbing words from other languages, its incapacity to feel qualms over the matter, its museum-size overabundance of vocabulary, its shoulder-shrug approach to spelling, its don’t-worry-be-happy concern for grammar – the result was a language whole colour and wealth Henry loved.” p. 17

“Taxidermy does not create a demand; it preserves a result.” p. 56

“Finally he found it where he should have looked first, on the Internet, which is a net indeed, one that can be cast farther than the eye can see and be retrieved no matter how heavy the haul, its magical mesh never breaking under the strain but always bringing in the most amazing catch.” p. 96

And one passage I absolutely adored, was Beatrice and Virgil (characters in the play within the novel) discussing a pear. Beatrice has never had a pear and Virgil is trying to describe one to him. This is a snippet:

“Beatrice: Describe a pear for me. What is a pear like?

Virgil: (settling back) I can try. Let’s see…To start with, a pear has an unusual shape. It’s round and fat on the bottom, but tapered on the top.

Virgil: A gourd? You know gourds but you don’t know pears?”

And Virgil continues to describe the pear (“A pear tastes like itself”), realizing how difficult it is to describe something that you have never experienced (not: I think I may have just had an epiphany about the novel while writing that sentence). But Virgil, and Martel, do a fairly good job of describing a pear.

Let me tell you a little about the plot. Beatrice and Virgil is the story of Henry, a writer who had a successful first novel about animals (Life of Pi, anyone?) but found himself unable to write anything else after publishers tore apart his idea of writing a flip book (nonfiction on one side and fiction on the other) about the Holocaust. A taxidermist sends him some pages from an old story and the two meet. The taxidermist, also named Henry, has written a play about a monkey and a donkey, Beatrice and Virgil respectfully, who are stuck in a Godot-like setting where not much seems to happen except a lot of conversation but is really much darker.

I adored the parts of the novel that were passages of the fictional play. I think Martel may have a future as a playwright if he so chose. But the actual novel was just…strange. There is an unfortunate incident with writer-Henry’s pets that seemed to exist solely to make me cry. The ending was sudden and not what I was expecting (I thought I had the twist figured out but I was very wrong). And why have two characters named Henry?

I think I understand what Martel was trying to do with Beatrice and Virgil but I’m not sure he succeeded. The Holocaust is, and will probably always remain, a difficult subject to write about in a nontraditional manner. But Martel has succeeded in giving us a book that we continue to discuss and debate and dissect. A book that no one seems to quite understand. A book some people say is brilliant and others disagree. And for that reason, I would recommend reading it. I think.

*The pages correspond to the e-book set to the publisher’s settings. They are probably not accurate at all if you have the print version.