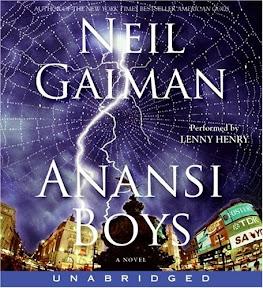 This review is going to be short and sweet mostly because I finished Anansi Boys ages ago and I’ve forgotten everything I had to say about it. Between that and not posting for a week, I’m feeling like a bad book blogger. But thanks for reading this anyway.

How do I describe the plot of Anansi Boys? Well, we have Fat Charlie, our main character, a Floridian turned Brit of West Indian descent. Fat Charlie is not really a fan of his dad because he always embarrassed Fat Charlie as a kid. But when his father dies, Fat Charlie gets dragged back into his world. Because the thing is Fat Charlie’s dad is Anansi – the mischievous spider god of West African folklore.

As you may guess, mischief ensues. First, Fat Charlie meets his long lost brother, Spider. And Spider certainly knows how to cause mischief himself (it’s explained that he got the divine powers side of the family). Then Spider steals Fat Charlie’s fiancé and ends up getting Fat Charlie framed by his boss for embezzlement.  After Spider’s visit, Fat Charlie must find a way to get his normal life back.

The book continues both in the present world and the “beginning of the world” where Fat Charlie encounters all of the ancient gods, represented by other animals.  Anansi Boys is a cleverly woven story of the plausible and the impossible.  It has magic but only just enough magic.  I think I can honestly recommend it even if fantasy isn’t necessarily your thing.

I just (as in two seconds ago) learned that Anansi Boys is a spinoff of American Gods (which I have not read). I’m not sure how that should affect my understanding of the novel. I felt it stood on its own pretty well.

Once again, Neil Gaiman has created a fantastic world the you won’t want to leave. His power over the language, his vision of rich and unique characters, and his ability to weave a complicated web (pun totally intended) of a story never ceases to amaze me.

Hmm…That wasn’t exactly short and sweet now, was it?

I loved Lenny Henry’s narration. His interpretation of the wide array of characters in Anansi Boys was fantastic. He easily switched between the British and Caribbean accents. He captured the smooth-talking Spider, the ancient Callyanne Higgler, and the pompous Grahame Coats. I highly recommend listening to this one – you’ll be in for a treat.