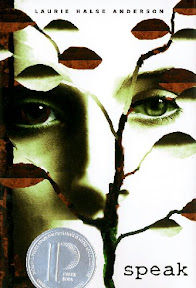 If I’d had my act together, I would have planned on celebrating Banned Books Week all week long. Instead, I can barely manage to get a post up. But I did make the decision to finally read Speak by Laurie Halse Anderson

this week. It’s been on my TBR list for ages and I actually checked it out of the library before the recent controversy grabbed the attention of the book world. Again, I’ve been a bit absent so I missed a lot of the Speak Loudly campaign but I caught enough to force me to actually sit down with the novel.

I don’t have a lot to say. I think the book stands well on its own and on the praise of all those who have already discussed it. I think it’s important for young women (and men) to have a book like this. One that illustrates the pain, shame, and silence that many girls feel after being raped or abused. One that supports them, that gets them. One that gives them the strength to speak up.

The fact that anyone would think this book was pornography appalls and angers me. Not only is silencing a book like Speak a travesty to free speech (and more than a little ironic), there is absolutely nothing about this book that is pornographic. I am against banning books (though I support parents’ rights to shape what their own children read) but I am ABSOLUTELY against banning this one. If anything, it should be required reading. If you need need convincing, read April’s post about why this book is necessary.

I didn’t want to write a normal review because I wasn’t sure how. But Speak is a smart, well-written novel and I highly recommend it. Plus, if when you read it, you’ll be standing up to ignorant people like that guy in Missouri.

9 thoughts on “Speak, or my contribution to Banned Books Week”