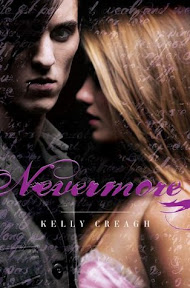 When Isobel, star cheerleader and star football player’s girlfriend, is paired with all-black wearing, lip-pierced Varen for a school assignment, she groans. But after spending some time with Varen working on their Edgar Allen Poe project she starts to fall for him. She ignores her old friends, breaks up with her boyfriend, and finds herself wrapped up in Varen’s mysterious life where she must enter his dream world (and encounter all of the haunting creatures in it) to save him.

My interest in Nevermore began when I was eavesdropping on a twitter conversation between Jen and April (click through for their gushing reviews) where they RAVED about it and lamented its lack of readers. They convinced me to give it a shot and within a few days I was reading it, ready to embrace the awesomeness.

Now, I did not react to Nevermore as strongly as they did. And I really wanted to. I think it was good. Better than good. But not so-amazing-I-am-now-dying-for-the-sequel.

Varen and Isobel have some crazy chemistry. I suspect Varen and anyone might have some amazing chemistry though (me perhaps?) because he is that good of a character. Unfortunately, they don’t act on it for a LONG time so that by the time something happens, it was less the product of great anticipation and more like something I had almost given up on.

Which brings me to the other reason I didn’t love Nevermore. The book itself is LONG. It’s 560 pages. I am not one to shy away from a good, long book, but this one felt unnecessarily long. I found myself getting a little bored during the last 200 pages and that’s where ALL THE ACTION is. Part of me might have enjoyed this book even if it didn’t have the paranormal part – I was just fascinated with the relationship. And I am not just saying that because the paranormal part gave me nightmares. Which it did (probably shouldn’t have read it while Ben was out of town).

That said, I don’t want you all to think I didn’t like it. Because I did. A lot. The creatures Creagh created were fascinating. While the dreamworld was a bit confusing, I think it worked really well – just like a real dream. And the subject matter – both Edgar Allen Poe and lucid dreaming are two topics that I have been interested in for quite some time.* After the I closed the book, I ended up doing some “research” on Poe. Creagh did a wonderful job of working his mysterious death into the novel. Oh, and I loved Gwen – she reminded me a somewhat calmer, definitely more sober Rayanne Graff.

Nevermore is worth the read if it sounds like your kind of book. I am looking forward to the second book, Enshadowed

, due out in January. For now, I may just stare at the gorgeous cover of Nevermore and dream about Varen. Don’t tell my husband.

*I took a Psychology of the Consciousness class in college (you know, the kind of class taught by someone who did way too many drugs at Harvard in the 60s) and lucid dreaming was one of the topics we covered. A few students claimed they could do it by the end of the semester. The trick to knowing you are dreaming is that you can’t control lights (turn them on/off) in dreams or read digital clocks. Once you realize you are dreaming, you are supposed to be able to do anything you want. Pretty cool, huh?