“It was before she began. It was a shadow with no signifgance. A world that was breathing but without form. She hadn’t even been thought of. She was dead without having died.” p. 8* 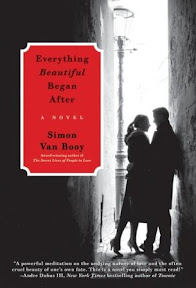 Rebecca, George, and Henry have all left their home countries to find refuge in Athens, a city full of lonely people. Their lives become endlessly entwined, forcing them to reflect on their complicated pasts and changing their lives forever.

This review could very easily be three sentences long. It would go something like this:

Simon Van Booy is a literary genius. This book is just as amazing as you hope it will be. Go read it now.

But I will go on.

Simon Van Booy IS a literary genius. He is probably my biggest literary crush at the moment. I adored Love Begins in Winter (I recently described it as “the closest thing to perfect a short story collection can be”). I had some concern that Van Booy’s talent might not translate from short story to novel. But that concern was completely unnecessary. This book IS just as amazing as you hope it will be.

Interestingly, I started reading this book on my last day in Athens. The city plays a large role in the book (it’s almost like another character). The timing was completely coincidental but I couldn’t be happier that Athens was fresh in my memory as I read.

I really didn’t see the path this book was going to take. I don’t want to give anything away because the lack of information meant that the story just ripped my heart out and caused more than a few  tears, smiles, and sighs.

Everything Beautiful Began After is beautifully told. During the course of a normal book, I might highlight 5 passages. Maybe. I highlighted 15. Every sentence is lovely. Van Booy doesn’t miss a beat.

Keep your eye out for my Best of 2011 list in January. Because I’m pretty sure this will be on it. Go read it now.

*Page numbers may differ in the final edition.

8 thoughts on “Everything Beautiful Began After [Book Review]”