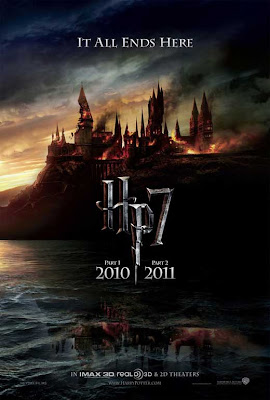 What a long, wonderful, funny, heartbreaking, hopeful, magical journey this has been. I am excited to see the final movie tonight, but I am also saddened by The End. We’ve faced The End before. In 2007, when the final book was released, I think there was a similar feeling. But we still had the movies to look forward to. So this End is a little more final (unless we count Pottermore).

I wish I could watch this final Harry Potter movie with my husband.  We were also living apart when the final Harry Potter book was released (the time zones have favored him both times), so maybe it is fitting. Harry Potter has been a part of our relationship from the beginning – we started dating right around the time the first movie was released. As lame as that sounds, it’s true, and I think this is the first movie we won’t be seeing together (even when I was in California for the 5th movie, we waited until he visited to see it). I have some wonderful friends here who are braving the midnight showing with me and I am very thankful for that. And hopeful that they won’t judge the tears that are sure to come.

How do you feel about the final movie? Are you happy? Sad? Bittersweet? Relieved that this Harry Potter nonsense will finally be over? Baffled by the entire fascination? Let me know. I want to discuss Harry Potter one more time before it ends.