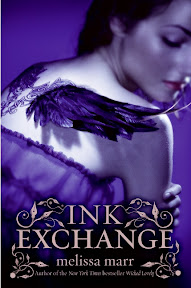 Leslie, Aislinn’s friend at school, lives with her druggie brother and alcoholic father. Sometimes the bills get paid. Sometimes they don’t. And once her brother used her to clear his drug debts. So life kind of sucks. Leslie works at night to save up money for a tattoo – something she feels she must do to take herself back. But Leslie is drawn to a dangerous tattoo. One that will link her to Irial, the king of the faery Dark Court. Aislinn didn’t want Leslie caught up in this world, but now she has no choice.

Ink Exchange is the second book in Melissa Marr’s Wicked Lovely series. It follows Wicked Lovely in time, but focuses on a different set of characters. Aislinn, Seth, and Keenan are no longer the focus, though they are definitely in the book. Instead, the story follows two characters we met in Wicked Lovely, Leslie (Aislinn’s mortal friend) and Niall (Keenan’s advisor), as well as a new player, Irial (the king of the Dark Court). I thought I would miss our old characters but they are around enough to satisfy any longing I had for them.

That said, I still couldn’t really put the book down. I wanted to find out what was happening, and the story, though vague, drew me in. Niall as a character – his competing need and inability to get close to Leslie and his struggle to find his place was fascinating and showed the delicate balance of power among the courts. In this sense, I did start to understand their world a little more.

Like Niall, Irial is a complex character. He is the leader of the Dark Court (the one we would probably call most evil – but perhaps it’s just misunderstood?). Yet he longs to find his successor. He has deep compassion for his subjects, and is trying to do anything he can to help them in this new Summer-Winter alliance world. I hope Irial is in the other books, I am looking forward to more of him.

And finally, we have Leslie. Like Aislinn, she is pulled into this world against her will. But she handles it all very differently. Leslie is another character who won’t give up and she gets a pretty kickass ending.

After writing all this, I’ve realized that while the story might be lacking sometimes, the characters are interesting enough to keep me reading. I am very much looking forward to this rest of this series.