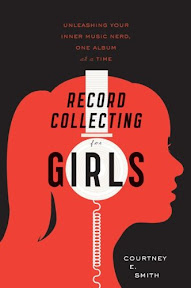 Title: Record Collecting for Girls: Unleashing Your Inner Music Nerd, One Album at a Time

Music lovers. I have a new book for you. Have you ever noticed that most books about music (and magazines about music) are written by men? Well Courtney E. Smith did. I hadn’t given it much thought but she is right. Women make up an even amount of music listeners, so shouldn’t we also write about music? Enter Record Collecting for Girls.

Record Collecting for Girls explores how women relate to music. There is a chapter about Top Fives (remember High Fidelity?), guilty pleasures (mine is the Glee soundtracks), “our” songs, and the classic Beatles vs. Stones debate. She explains why loving The Smiths too much is a dealbreaker for her in men and questions why there are so few girl bands. Each chapter ends with a playlist. Which will be helpful the next time you are in need of some making out or breaking up music. And there are entertaining Interludes along the way (one such Interlude has made be give last.fm another try).

Because this is a book about music, it’s understandably very personal to the author. Some people may not like this (because their musical tastes are very different or they may even suffer from the dealbreaking Smiths Syndrome), but I think it would be impossible to avoid. Smith is five years older than me (as determined by where she was in life when Romeo + Juliet was released). This could be decades in music years, so while I relate to many of the artists she discusses (we share a love for The Shins), some of them I’ve never really experienced. This doesn’t ruin the book at all for me. I can still relate to the feelings behind it (although she did almost lose me by saying she cannot stand Arcade Fire and I actually DO think The National are genius).

If you are a music fan, man or woman, I think you will enjoy this book. It’s lighthearted, funny, and makes you look into your music habits. Plus, I have about a hundred new tracks to go listen to now and there aren’t many things in life that make me happier than new music.

“It’s rare that a female musician is able to develop her image in a way that doesn’t revolve around her physical appeal to the male population.” p. 48*

“Some people might think underground or indie rock artists letting their music be used on soundtracks to blockbusters like New Moon is a big sell-out move. I think it’s a helpful lift to the music taste of future generations. Like giving kids a little bit of fiber with their hefty dose of sugar.” p. 75

On guilty pleasures: “It’s music that causes you to roll up the windows in your car for fear a pedestrian or biker might here.” p. 80

“Indie-music fanatics, both male and female, are captivated by the idea of being first. We want to feel ownership over artists before anyone else even knows who they are.” p. 84

Extra: Follow Courtney E. Smith on Twitter. [P.S.: I love that we live in an age where I can finish a book and then chat with the author 10 minutes later].

*Page numbers reference the e-galley and may differ in the published book.