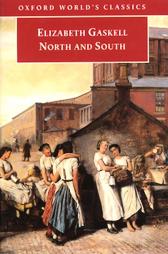 I’m not going to “review” North and South by Elizabeth Gaskell. I always find it difficult to write reviews for classics, and this is no exception. So here are some random thoughts from my reading of North and South.

First, the story (if you don’t know) is about Margaret Hale, who moves to the fictional northern manufacturing town of Milton from her father’s country parsonage outside of London. Got it? That’s the north and the south part. Margaret doesn’t take to the manufacturing life very well and has many run-ins with Mr. Thornton, who owns one of the plants and happens to be in love with Margaret. See where this is going?

I have to confess that it took me AGES AND AGES to read North and South. Like 6 months or so of an on-again/off-again relationship. This clearly affected my opinion of this book (the longer a book sticks around on my nightstand, the less I like it).

I wanted to love North and South. If I’d read it 5 years ago, I might have. Back then I actually read classics in fewer than 6 months and really enjoyed them. But my attention span isn’t want it once was. I blame the internet. Classics are now a lot of work for me.

There were things I liked (though nothing that is jumping out at me right now) and things I found difficult (the dialect/slang!). I found the debates about workers vs. factory owners to be interesting (might be that labor and employment law thing) and I was very intrigued by the side story of Margaret’s brother and his mutiny/exile (now THAT would have made an exciting book).

And just when I was getting into the book, it became the SADDEST THING EVER. At one point I told twitter that I was going to stop reading if one more person died. Seriously. It was like the end of a Shakespeare tragedy.

So my experience with North and South was not what I hoped it would be. But I am glad that I read it because it was one of those books I felt like I MUST read someday. But perhaps I will go back to my beloved Russians for my next classic. I’ll pick Tolstoy over Gaskill any day.

(You all are going to tell me to go watch the BBC mini-series, right? I started it after finishing the book but more North and South was not what I needed just then. I will return to it – I swear.)

2 thoughts on “Scattered Thoughts on North and South”