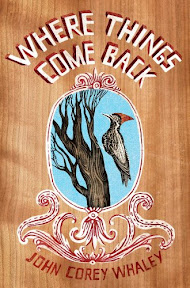 Just when seventeen-year-old Cullen Witter thinks he understands everything about his small and painfully dull Arkansas town, it all disappears. . . .

In the summer before Cullen’s senior year, a nominally-depressed birdwatcher named John Barling thinks he spots a species of woodpecker thought to be extinct since the 1940s in Lily, Arkansas. His rediscovery of the so-called Lazarus Woodpecker sparks a flurry of press and woodpecker-mania. Soon all the kids are getting woodpecker haircuts and everyone’s eating “Lazarus burgers.” But as absurd as the town’s carnival atmosphere has become, nothing is more startling than the realization that Cullen’s sensitive, gifted fifteen-year-old brother Gabriel has suddenly and inexplicably disappeared.

While Cullen navigates his way through a summer of finding and losing love, holding his fragile family together, and muddling his way into adulthood, a young missionary in Africa, who has lost his faith, is searching for any semblance of meaning wherever he can find it. As distant as the two stories seem at the start, they are thoughtfully woven ever closer together and through masterful plotting, brought face to face in a surprising and harrowing climax.

I first heard of this book through Ginger from GReads. And if you know Ginger, you know that when she loves a book she makes sure the whole world knows it. When it won the Printz Award, it came back on my radar and I decided to finally give it a shot. So based on these recommendations, I had somewhat high expectations.

But I guess I didn’t really know what to expect. I actually thought it would be a younger book than it is, almost middle grade, but it’s definitely mature enough for the young adult designation.

The main character, Cullen, has a unique voice. His narration hints at Holden Caufield or Sal Paradise without actually emulating them. You just really feel like you’re in his head. Alternating chapters with Cullen is the story of Benton Sage, a young missionary who loses his way, and Cabot Searcy, his college roommate who tries to find it.

Things sort of happen and I wasn’t really sure where they were going or how they made a cohesive story but by the end, it worked.

Overall, this wasn’t the amazing book I thought it might be, but it was different than anything else I’ve read and is definitely worth checking out.

3 thoughts on “Where Things Come Back [Book Review]”