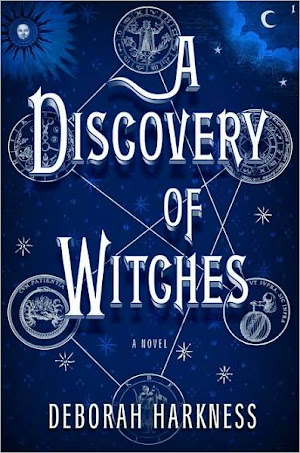 Diana Bishop descends from a powerful line of witches, but she has always suppressed that part of her preferring to work her way up in academia instead. While researching at Oxford, she comes across Ashmole 783, a book others have been searching for for centuries. When Matthew Clairmont, a very old vampire enters her life around the same time, Diana can no longer hide from her powers.

I was discussing this book with a friend and she suggested that people either love or hate it. But I am actually somewhere in between. There were times that I really enjoyed it. Then there were times that I was bored out of my mind. The thing is, I was pretty interested in the story. It was just about twice as long as it needed to be. Had this been print, I likely would have given up.

I also had some issues with the Diana-Matthew relationship. For someone who was supposed to be self-sufficient, Diana sure let Matthew boss her around. There was almost a – dare I say it – Edward-Bella thing happening.

However, looking back on it, I do think there is a very good story here and I know a lot of people who adored this book. If it looks interesting to you and you think you’re up for the task, A Discovery of Witches might be worth a try.

I’m on the fence about reading the recently-released sequel. The book ends in such a way that I am curious about what happens. And the premise of the second book sounds interesting. But it’s another 24 hours of listening and I’m not sure I want to commit to that.

Ms. Ikeda did an excellent job. She handled Diana’s voice very well but also captured the various accents of the others. Because this book can be a slow, I’d recommend the audio if you’re going to read it.

5 thoughts on “A Discovery of Witches [Audiobook Review]”