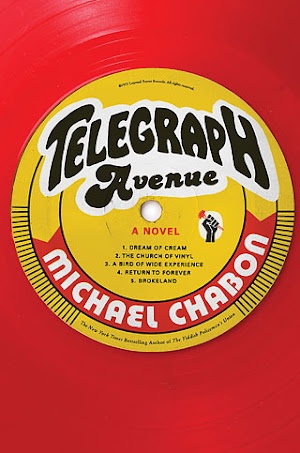 After 130 pages, I’ve decided to put down Telegraph Avenue. I tried to keep going because, while I never feel that I owe a positive review in exchange for a review copy, I do think I owe it to the publisher and author to read the book. But it became clear that this book was not for me. It took me two weeks to read as far as I did. I was not connecting with the characters, I wasn’t into the story, and I found myself re-reading a lot of sentences.

So I am going to leave you with the publisher’s summary and some positive reviews. Just because it wasn’t the book for me, doesn’t mean it won’t be the book for you.

As the summer of 2004 draws to a close, Archy Stallings and Nat Jaffe are still hanging in there—longtime friends, bandmates, and co-regents of Brokeland Records, a kingdom of used vinyl located in the borderlands of Berkeley and Oakland. Their wives, Gwen Shanks and Aviva Roth-Jaffe, are the Berkeley Birth Partners, two semi-legendary midwives who have welcomed more than a thousand newly minted citizens into the dented utopia at whose heart—half tavern, half temple—stands Brokeland.

When ex–NFL quarterback Gibson Goode, the fifth-richest black man in America, announces plans to build his latest Dogpile megastore on a nearby stretch of Telegraph Avenue, Nat and Archy fear it means certain doom for their vulnerable little enterprise. Meanwhile, Aviva and Gwen also find themselves caught up in a battle for their professional existence, one that tests the limits of their friendship. Adding another layer of complication to the couples’ already tangled lives is the surprise appearance of Titus Joyner, the teenage son Archy has never acknowledged and the love of fifteen-year-old Julius Jaffe’s life.

An intimate epic, a NorCal Middlemarch set to the funky beat of classic vinyl soul-jazz and pulsing with a virtuosic, pyrotechnical style all its own, Telegraph Avenue is the great American novel we’ve been waiting for. Generous, imaginative, funny, moving, thrilling, humane, triumphant, it is Michael Chabon’s most dazzling book yet.

Other reviews: Layers of Thought; (the other) What She Read