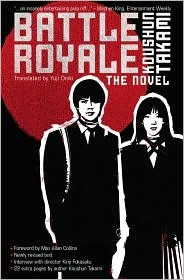 Under the guise of aiding the country’s military, 42 Japanese classmates are brought to an island, where they are instructed to kill each other until only one remains. But Shuya Nanahara doesn’t want to play the game. After witnessing his best friend’s murder, he teams up with Noriko Nakagawa to find an escape.

My husband just asked me if I enjoyed this book. I’m not sure you can “enjoy” Battle Royale, but I was intrigued and very curious to see how it was going to end since Shuya and the others seemed to be in a hopeless scenario. The translation is rough, but the fast-moving plot helps push through any awkwardness.

While Shuya is the focus, the book switches point of view frequently to tell the stories of the other stories. I heard the CW might be making this into a television show, and I think it could work really well if each secondary character got an episode to tell their story before they die. I would watch that show.

I’ve wanted to read Battle Royale since hearing that The Hunger Games was very similar. I preferred The Hunger Games. Battle Royale is REALLY violent. I know it is kids killing kids and it’s awful no matter what, but in one scene a girl gouges a boy’s eyes out in excruciating detail. I just want to make sure you have that heads up. I also thought the world-building in The Hunger Games was much better. Here, I was confused why they were fighting and why they were making modern day references if it was some time in the future (or maybe it wasn’t).

One problem I had is that there are 42 Japanese names to keep track of and to my American year, many of them sounded very similar (a Yukie, Yuko, and Yuka all in the same scene?!) and were difficult to keep straight.

I’m still thinking about Battle Royale although I finished it over a week ago. It’s not a book I am going to forget anytime soon.

As I said above, the translation was rough, and the emotionally detached narrator did not help smooth it out. Dacascos performance lacked any character differentiation which could have given the reader a way to keep all of the students straight. I am curious if the flat narration was a conscious choice given the book’s culture. The narration wasn’t bad – it just wasn’t what it could have been. That said, I’m glad I listened to this. I may have been tempted to put it down in print when the violence surged.