Warning: Baby Break. While this is still very much a book blog and not a mommy blog, I think you can probably expect me to take a break from the bookish talk to blog about baby things now and then. This is one of those times. 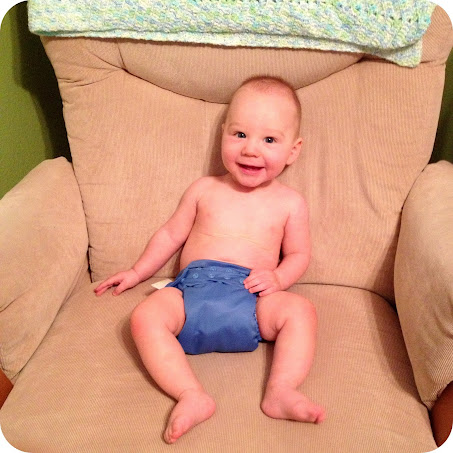 When you mention cloth diapers, just like with most parenting decisions, people have their opinions. But a lot of people don’t know what modern cloth diapering involves. So today I am sharing all of the answers you could ever want about my cloth diapering experience so far.

Did You Always Use Cloth Diapers?

Prior to having the baby, I looked into cloth diapering. I liked it for several reasons: the cost savings, the environmental concerns, and they just look so cute. But I wasn’t prepared to invest several hundred dollars on cloth diapers before I even knew what it was like to have a baby. So when Evan was born, he went straight into disposables. And let me tell you, you change A LOT of newborn diapers that first month. I couldn’t imagine not using disposables then. What with the exhaustion and the hormones making me crazy and the constant feeding and peeing and pooping.

I got used to disposables and kind of forgot about my cloth diaper plan for awhile.

How Did You Get Started?

When Evan was about 4 months old, I’d been back to work about a month, and things were starting to calm down, I began thinking about it again. Once my daycare provider agreed to using cloth diapers, I figured I didn’t have any excuses. So I found an online trial through Jillian’s Drawers. JD sends you a variety of brand new diapers (prefolds, covers, all-in-ones, pocket diapers, etc) and you get 3 weeks to try them out. At the end of 3 weeks, you return them and you get your money back (less $10 shipping, $10 deposit, and anything you keep). Not only did it let me try the various types of diapers, it let me try cloth diapering in general. And it was especially helpful for my husband, who was probably less committed to the cloth diaper idea than I was. This gave us a chance to see how easy it really was.

Which Diapers Do You Use?

I decided to go with the BumGenius Freetimes. I went for the all-in-one because we’re both working parents with limited time and I didn’t need to give us  or Evan’s sitter any extra work. These have two flaps that you fold in so you can customize the absorbancy where you need it and because they are flaps, they don’t take any longer to dry than pocket diapers (which was a previous flaw in old all-in-ones). 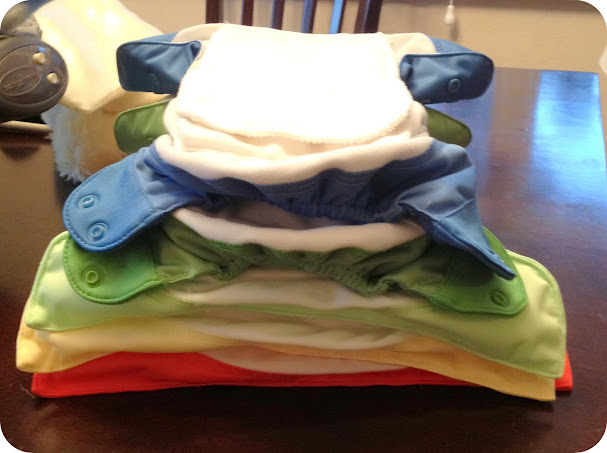 At $20 a piece, the Freetimes are on the pricier side. But the extra money was worth it to me for the time I’m saving by not stuffing or folding diapers. They also will fit him until he’s out of diapers competely. The Freetimes can be used on babies from 8-35 pounds – you adjust the size with snaps in the front.

How Many Diapers Do You Have?

How Do They Work?

Amazingly well. I don’t think I’ve had a single poop explosion since the switch. And no leaks either. The Freetimes aren’t really any harder to put on or take off than disposables.

I still put Evan in disposables at night. I have not been brave enough to try the cloth diapers at night yet since he goes 10+ hours without a diaper change and I don’t want him to be uncomfortable since he can feel the wet diaper more in cloth (allegedly a plus when it comes time to potty train).

Where Do You Put Dirty Diapers?

Since Evan is exclusively breastfed, I just toss them right into a reusable bag (I use Planet Wise Pail Liners) in the same container we were putting disposables before (the Babies R’ Us version of the diaper genie). I would really like to get just a regular trash bin instead but it works for now. I have two bags so that I can use one while the other is being washed. The bags go in the wash with the diapers, so there is no touching the dirty diapers after I’ve taken them off the baby.

Once E starts solids, I will buy a diaper sprayer to attach to the toilet. Wet diapers will still just go straight into the bag, while dirty diapers will get a quick rinse over the toilet first. 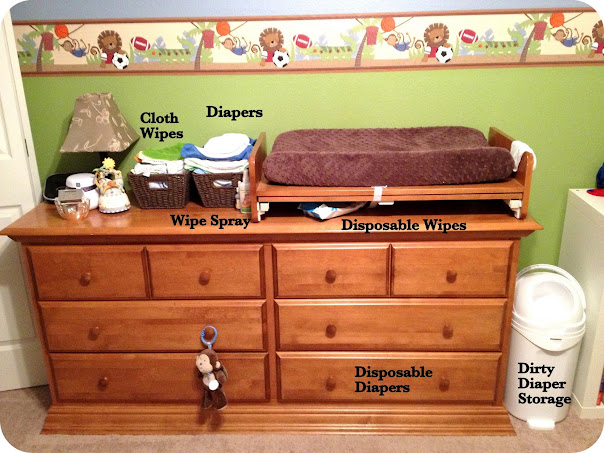 What About When You Go Out?

When I go out, I just take a reusable wetbag with me to put the dirty diaper in. I bought my wetbags on a friend’s recommendation from Monkey Foot Designs. They are super cute and very effective.  I have a small one that fits two diapers for quicker trips, and a large one that fits six diapers for longer trips. I send this larger one to daycare with Evan every morning and take it home in the afternoon. Like the pail liners, the bags are washable so I just dump the diapers in the wash, then throw the bag in with them. I never have to touch the diapers once they’re in the wetbag. I will probably buy a few more of these because they are so useful. 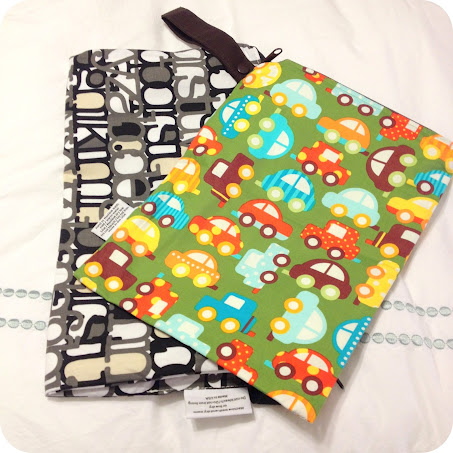 How Do You Wash Them?

I put them in the wash after Evan goes to bed and they’re out of the dryer before my own bedtime.  On the weekends, I wash them in the morning so that I can dry them in the sun and let the sun bleach any stains away (@bookishlyfab taught me this trick and it is AMAZING). 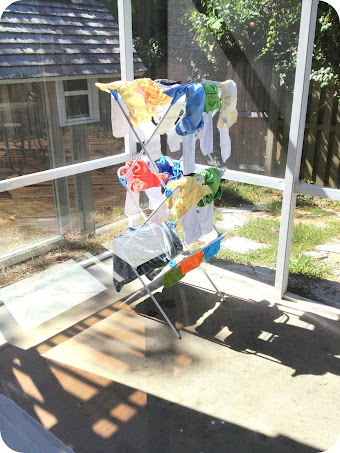 Do You Really Save Money?

Yes. I did a conservative estimate of what I would spend on disposables over three years and got $1500. I’ve seen even higher estimates around the internet.

With cloth, I spent less than $500 for everything – diapers, cloth wipes, and reusable bags – but that’s just a one time cost! The only ongoing cost I have now is detergent (my water bill isn’t affected because is part of my flat HOA fee, but even with the water, cloth is supposed to save money). And if you use prefolds or other less expensive diapers, you can spend much less.

So I’m saving about $1,000 by cloth diapering. And I’ll save even more if we end up using the same diapers on a second kid.

How Did You Get Your Daycare Provider to Agree to Cloth Diapers?

I brought in a diaper for her to look at before we got started and she was pleasantly surprised. She was apparently willing to do cloth even when she thought it was still diaper pins and rubber pants! Then I asked her to try them one day and see what she thought. She was amazed at how easy it was and really likes them. Now it’s just part of the routine.

It doesn’t hurt to ask. The worst that will happen is your daycare provider will say no. You can still cloth diaper part time (that was my plan when I assumed she wouldn’t even consider cloth diapers).

Who Else Uses Cloth Diapers?

On Twitter: @wordlily, @elibrarian13, @jennandtonica (she cloth diapers her TRIPLETS), @theecochic (she is local-to-me and runs a cloth diapering blog). I bet they would all be happy to give you their perspective.

I also have some real life friends who cloth diaper and they were really helpful when I was getting started.

So Are You Happy With Your Decision?

Absolutely. Just the other night, Ben and I were discussing how happy we are with this decision. And look how cute this little guy is! 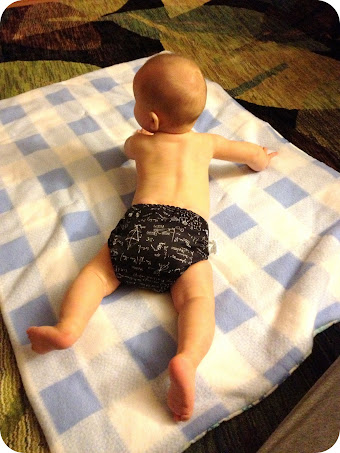