“He had no memory of life without Jim being the brightness of its center.” 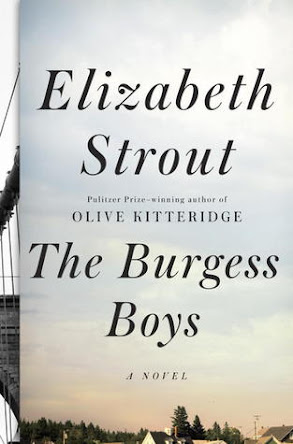 The Burgess Boys, Jim and Bob, have long since left their sister, Susan, in Maine for bigger and better things in New York City. Jim married a wealthy woman, raised three kids, and became famous from an OJ-like trial, while Bob – always in Jim’s shadow – is divorced, childless, and works at Legal Aid. When Susan’s son, Zach, throws a pigs head into a Mosque during Ramadan, the brothers must return to Maine. A family who has long since stopped being a family is forced together once more.

Oh, I have rather sad news today, readers. I did not love The Burgess Boys.

I am actually really bothered by the fact that I didn’t care too much for this one. Like in a breakup, I want to say, “it’s not you, dear book, it’s me. I didn’t spend enough time with you or focus on your needs.” And this is definitely at least part of it.  Because the last few weeks have been so busy, it took me a long time to read this book. And at some point finishing this book became a chore. But it wasn’t all me.

I went into The Burgess Boys expecting sadness, heartbreak, and struggles, which I got. But I also expected excellent writing, Elizabeth Strout set the bar VERY high for me with Olive Kitteridge. This one, apart from a few gems (see above and below) just didn’t live up to those expectations for me. I also had a hard time connecting with any of the characters   By the time Bob became someone relatable and likeable, I’d already given up finding a connection with anyone. Finally, I found the book lacked that interesting “thing” that pulls me into a story.

So, readers, I tried, and maybe I didn’t try hard enough, but I think, like a REAL breakup, the fault lies with both The Burgess Boys and myself.

As a counterpoint, I urge you to read Jen’s review over at Devourer of Books – she loved the book.

“And it was too late. No one wants to believe something is too late, but it is always becoming too late, and the it is.”