June is Audiobook month (you may have seen the #jiam2013 hashtag floating around). The audiobook community is giving back by teaming with the Going Public Project by offering a serialized audio story collection. All proceeds will go to Reach Out and Read literacy advocacy organization. Throughout June, 1-2 stories will be released each day on the Going Public blog and on author/book blogs. 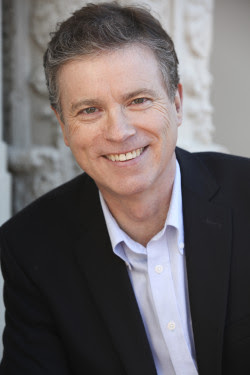 Today, I have the pleasure of playing host to Simon Vance. He has chosen a Richard Jeffries story, Wild Life in a Southern Country, to share with you all. But first, I asked him a few questions so we could get to know the man behind the voice a little better.

Michelle: You’ve narrated over 700 (!) books. Is there one that is dearest to your heart?

Simon: No, I can’t say that there is.  I love them all while I’m doing them (well, almost all) and some of them linger in my memory longer than others.  Usually I remember specific titles more because of what other people say about them than that I particularly pick them out. I must say I’m particularly pleased when I hear people still enjoying the Aubrey/Maturin books of Patrick O’Brian.

Michelle: Narrating audiobooks sounds like a pretty sweet gig. What was the worst job you’ve ever had?

Simon: Okay, before you say narrating is a ‘sweet’ gig, you try it!  It’s actually quite tough and requires intense extended concentration, much more so than almost any job I can think of (well, maybe astronaut).  But anyway…It does allow me to schedule my own time to a greater extent than other jobs.  Which brings me to ‘the worst job’ – well, not just one…just about any office job I’ve ever had.  I am not built to conform to a certain space and someone else’s decisions on how to use my time (I can do it for a while when necessary, but not 9-5, 5 days a week).  I admire people who can make that work for them but… it’s not for me!

Michelle: Quick clarification from this 9-5er: I meant “sweet gig” in the “dream job” sense, not the “easy job” sense. I think narrating audiobooks is a very challenging profession and one I definitely would not be able to do.

On your website, there are 5 pictures of you “over the years.” Yet, in them, you appear not to age. What’s your secret?

Simon: Oh, I thought I did age… I should increase the resolution, then you’d see!  I could say healthy living and a pure state of mind… but I’d be lying.  Maybe it’s because I live in California and it keeps me young… or maybe it’s that contract I signed with the devil (and please don’t look at the portrait in my attic)…. By the way, are you saying I could have continued to use the first headshot I ever had? (all that expense).

Michelle: Everyone seems to think you have a great voice for the classics (my husband actually just finished your rendition of Great Expectations). Do you have a favorite genre to narrate?

Simon: I suppose ‘Classics’ as a genre is absolutely up there.  But really I love any book that’s well written, and those are spread across all genres.  Classics by definition are well written, so I’m going to love a greater proportion of them.

Michelle: Has living in both England and the U.S. has made you more versatile than other narrators? Would you encourage aspiring narrators to spend time abroad?

Simon: Starting early in this industry and being asked to do ‘everything’ makes you versatile… I’m not sure it has to do with being an international traveler.  In answer to the second part of your question – No, the expense would not be worth the reward – by all means get out and about. Be out there listening to people, understand the way people sound when they talk.… but you can do that in your own home town.

Michelle: Do you prefer audio or print when reading for pleasure? Or are you too busy narrating all of those audiobooks to read for fun?

Simon: I have no time for audiobooks outside work and little time for print books (lots of research in advance of recording required for this job).  But when I do have time it’s always print. Currently I have Neil Gaiman’s Graphic Novel series The Sandman by my bed… it has pictures…

Michelle: Do you recall the first audiobook you ever listened to?

Simon: If it counts, Under Milk Wood by Dylan Thomas as recorded in the 50s with a cast led by Richard Burton… in school.  But I grew up having books read to me all the time on BBC radio… we were lucky growing up in the UK.

Michelle: Tell us a little about the story you chose and why you chose it.

Simon: When I worked at BBC Radio Brighton the man who took me under his wing (arts producer Keith Slade) and a colleague from the newsroom (Ivan Howlett) created a little production company called ‘Lectures at a Loss’.  They presented shows mixing music with sound FX and changing pictures/photos displayed on large screens behind live actors reading from hand held scripts.  I did a show with them on board the Cutty Sark at Greenwich and a wonderful one about the artist Aubrey Beardsley (where I worked with the actor John Nettles who went on to play the detective Bergerac in the long running BBCTV series).  One of my favorite shows was “Richard Jeffries: Prose Poet of the South Coast” – mixing the music of Vaughan Williams with actors reading from Jeffries’ books and telling the story of his life (with a montage of slides of the southern countryside behind).  I fell in love with this gentle man and his writing.  One year, when Burl Ives was in Brighton, we adapted it and played it for free in front of him, his wife, and a couple of his friends in his room in the Regent Hotel in Brighton (it was a very large suite). You can see why the company was ‘Lectures at a Loss’… we never made a penny!  Burl Ives is gone now as are my good friends Keith and Ivan… but I still have Jeffries.

Richard Jeffries’ work has been underappreciated over the years and I’d love to record much more of it, but the demand is just not there – this was an ideal chance to give people a taste.

So without further ado, here is Richard Jeffries’ Wild Life in a Southern Country narrated by Simon Vance:

The story will be free (online only – no downloads) for one week. In collaboration with Blackstone Audio, all the stories will be available for download via Downpour. If you’d like to download Simon’s story, click here. The full compilation will be ready June 30th. All proceeds will goto the Reach Out and Read literacy advocacy organization.

Lastly, check out yesterday’s post over at Audiobook DJ and stop by Rachel Has Spoken tomorrow. The full schedule of the story release dates and narrators are at Going Public. Engineering and Mastering are provided by Jeffrey Kafer and SpringBrook Audio. Graphic design provided by f power design and published by Blackstone Audio. Project coordination and executive production by Xe Sands.