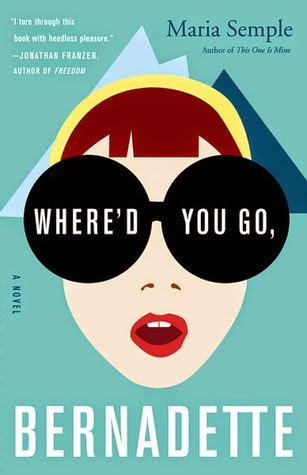 Bernadette Fox is notorious. To her Microsoft-guru husband, she’s a fearlessly opinionated partner; to fellow private-school mothers in Seattle, she’s a disgrace; to design mavens, she’s a revolutionary architect, and to 15-year-old Bee, she is a best friend and, simply, Mom.

Then Bernadette disappears. It began when Bee aced her report card and claimed her promised reward: a family trip to Antarctica. But Bernadette’s intensifying allergy to Seattle—and people in general—has made her so agoraphobic that a virtual assistant in India now runs her most basic errands. A trip to the end of the earth is problematic.

To find her mother, Bee compiles email messages, official documents, secret correspondence—creating a compulsively readable and touching novel about misplaced genius and a mother and daughter’s role in an absurd world.

I want to thank whoever recommended this one to me. I know I’m behind the times, but I thoroughly enjoyed this book.The characters were whimsical and the plot pushed the boundaries of reality. I was hooked early on and through all of its crazy antics, I just kept hanging on for the ride.

Fellow Gilmore Girls fans will recognize Kathleen Wilhoite’s voice immediately as that of Luke’s sister, Liz. She has an excellent voice for this novel, with the ability to portray both 14-year-old Bee and an array of adults.