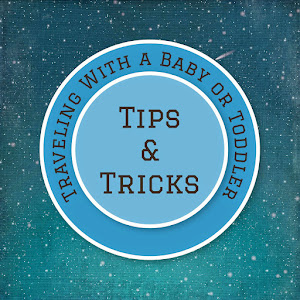 If I am counting correctly, I have taken Evan on 12 different trips involving airplanes, which, including connecting and return flights, adds up to about 30 separate flights. And he’s not even 3 yet. He took his first flight at 7 weeks. And by 7 months, he had been on 8 different airplanes.

When people know this, I get asked for tips. I have talked several first time moms through their first flight planning. Which is why I thought this post might be helpful. Now, I only know what it’s like to travel with one child at this point, so my knowledge is limited to that, but it always seems to be the first time moms of singlets that are the most nervous about flying with their babies, so I still think it’s helpful. Maybe I’ll do a follow-up after we’ve flown with Baby Brother a few times.

Disclaimer: Babies are absolutely safer in car seats on airplanes than they are on your lap. The FAA agrees. This is common sense but not widely practiced. The reason lap infants are still allowed is purely due to political influence and monetary decisions and has nothing to do with safety. On top of that, checking your car seat is a bit risky and not bringing one means that you have to rely on a questionable seat at your destination (I have never used a rental car carseat and I don’t ever plan on it). That said, I only started buying Evan a seat at 15 months and I am not sure what I’ll do with Baby Brother when it comes time to take him on a plane.

Check as many of your bags as possible. You will still have a lot of stuff to carry but get rid of everything you can. This is why I love Southwest – free bags!

We usually bring one carryon bag for each of us. A diaper bag for E, a camera bag for me, and Ben’s school bag for him. We bring the car seat and sometimes we bring a stroller. We put everything else we don’t need on the plane into suitcases that we happily check.

Evan’s bag has diapers (lots!), a change of clothes for him and me (I’ve actually had to change my shirt in my airplane seat thanks to spit-up), snacks, a water bottle (which I fill after security), his kindle, headphones, and a couple of books and toys. That’s it. My bag usually just has my camera, personal items, book, and water, and Ben’s just has his school work, computer, and a book. My boss would tell you to embrace the stuff. I say minimize it.

I park as close to the airport as I possibly can. We used to use the economy lot, but now I’ll gladly pay 4 extra dollars per day to avoid a shuttle. If you can get a ride, even better.

Once my bags are checked, I have two ways of getting through the airport, but they both involve wearing Evan. In scenario 1, I bring a stroller and use it to lug the carry-ons and car seat and, in scenario 2, I borrow my friends Go Go Babyz wheels and turn the car seat into a roller bag and use THAT to lug all of the bags. In either circumstance, I wear Evan through the airport and security, no exceptions. I’ve watched parents go through security where they have to take little ones out of strollers or wrangle energetic or unhappy toddlers while trying to take their shoes and belts off and TRUST ME wearing your kid is so much easier. E is over 3 feet tall and more than 30 pounds and I still throw him on my back in the ergo. I’ve only been questioned about it twice by misinformed TSA agents.

Most airports will usher you through the family line, which means you get to skip the long one with all of the common folk and get through security faster. Once you go through the metal detector wearing or carrying a child, they will do a quick test on your hands to make sure you don’t have any explosive residue. It takes a few seconds. Despite the 3-oz liquid rule, you can bring formula/expressed breast milk/liquid snacks for children. Kids under 12 can also leave their shoes on through security.

Tip #5: Find a Play Area or Create Your Own

For me, waiting to board the airplane is the hardest part. Some airports have some pretty awesome play areas (MSP, I’m talking to you) which make it so much easier. It’s also a great way to burn some energy since your kid has been cooped up and will be cooped up even more one you get on the plane. If there is no play area, I spend my time chasing E around the airport, which becomes a playground itself. If you have anything to gate check (your stroller, car seat, etc.) don’t forget to get a tag for it at the counter before boarding begins.

Some airlines pre-board families and some don’t. I generally fly Southwest where families can board after the A group (at most 60 people) boards. Before the merger with Southwest took full effect, Airtran didn’t preboard at all and, if you didn’t pay extra, they’d assign you all to different parts of the plane. I would then have to get the gate agent to switch them (although I liked the idea of letting someone else hangout with E for the flight while I took a nap). The last time I flew Delta, I was still able to pick seats together for free. On Southwest, where there is open seating, I’ve never had trouble finding seats together when boarding with families (although I still try to get one of us a coveted A spot if I can).

Sometimes I have Ben board first to install the car seat since that takes a few minutes. When I’m by myself, it’s a bit more complicated. Picture me with a toddler on my back, two bags on my front, and a car seat over my head walking down a partially-boarded plane. Then picture me installing the car seat while the toddler is still on my back. It’s awkward but a bit empowering. People actually cheer you on. Seriously. And once in awhile someone offers to help. LET THEM. If a stranger wants to carry my carseat for me, I gladly hand it over. If you have a stroller, or if you’re gate checking your carseat, you’ll leave it at the end of the jetway to gate-check. If you are using a car seat on the plane, it has to be used in a window seat. Others will say you need the lap extender to install the car seat but I find it easier to do without it. You might not be able to install the car seat rear-facing, so make sure you’ve adjusted the straps accordingly. Every time I get on an airplane, I swear I have less space.

Tip #7: Car Seats Are Your Friend

Now that Evan is a toddler, he uses a car seat on planes and he will for a long time. It keeps him restrained and comfortable and safe. Plus, it’s familiar. They only time I let him out is to change a diaper because a taste of freedom is too much for him to handle. Some people let their kids wander the aisle, but I’ve never felt comfortable doing that (E is a runner) and I’ve never felt it necessary on my usual 2-3 hour flights. I am thinking about getting the CARES harness for Evan after Baby Brother is here so we don’t have to travel with two car seats. It’s FAA approved and seems better than letting a 3-year-old use just a lapbelt to me.

Tip #8: Nurse or Give Snacks & Water for Ears

When Evan was a baby and I flew with him as a lap infant, I would generally nurse him during takeoff and landing. This is supposed to help with the ears but Evan has honestly never seemed to have an issue with the pressure.  I will give him frequent sips of water or chewy snacks to try to get his ears popping.

We do diaper changes in our seats and only if absolutely necessary. Airplane bathrooms are SMALL. Some of them have changing tables. Some of them do not. I’ve never used one and I’ve changed a lot of mid-flight diapers (I used to say Evan hasn’t met a plane he can’t poop on). We just lay him across our laps and do our thing. (This also where cloth diapers actually come in handy because you don’t even need to get up to dispose of anything). I always change E’s diaper before and after a flight in an attempt to minimize mid-flight changes.

If you’re by yourself and need to use the restroom, page a flight attendant. They are usually willing to sit with your kid for a minute while you run to the restroom. I’d wait until all of the beverages/snacks are distributed before asking this favor though.

As for entertainment, I have an unlimited screen time and unlimited snacking rule when traveling. Evan’s screen time is limited at home so this is a real treat for him. We even got him his own Kindle specifically for traveling. I pack a large ziplock bag with fruit snacks, crackers, and other treats and Evan gets to pick whatever he wants. I figure one day here and there where he eats four bags of fruit snacks isn’t going to kill him. I also like to fly at nap time and bedtime (in pajamas) and hope he sleeps. But sometimes this backfires. His worst flight ever was last month when I was flying alone with him from DC to Tampa. It was way past his bedtime and he whined and cried from exhaustion for the last hour of the flight but refused to sleep. I usually bring crayons and small toys but we never end up using them. Evan is pretty content watching Mickey or playing a game on his Kindle.

I make the whole thing an adventure. Evan loves it when I tell him we’re going to the airport. He loves watching the plane go really fast and take off. He counts it down like it’s a rocket ship and then claims that we are in outer space. He loves being in the clouds. He loves talking to everyone we meet along the way and winning them over with his charm. I am a nervous flyer. When I’m not pregnant, I actually take anti-anxiety meds to help me get through flights. But having Evan with me is a wonderful distraction and it’s so fun to watch him be so excited about something as annoying as air travel.

Tip #10: Things Will Go Wrong So Go with the Flow

First, PLEASE do not be one of those people who bring a goody bag for all of the people on the plane because it is your kid’s first flight. Your child has as much of a right to be there as the guy rolling his eyes at you as you walk on the plane. Keep your kid from disturbing others as much as possible but don’t let other passengers intimidate you. Most people are friendly and understanding. And if they’re not, that’s not your problem.

Your kid might get upset. Your kid might kick the seat in front of you. Your kid might throw up all over you (this has happened to me twice). It’s all temporary and it won’t stop you from getting to your destination. You’re a parent, just do your thing like always.

I hope some of you find this helpful. Traveling with a small child seems daunting, but with some good planning, it really is very manageable. Let me know if you have any tips or tricks I missed in the comments.

One thought on “Flying With a Baby or Toddler: Tips and Tricks”