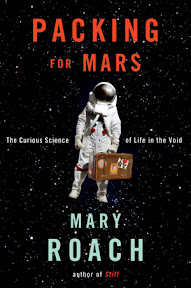 When Mary Roach decided to write about space travel, she decided to take an interesting approach: how does the human element factor in? Astronauts need to eat, sleep, breathe, bathe, and urinate. It turns out this takes a great deal of planning. Packing for Mars examines each of these issues (and more) in detail.

Space is one of my biggest nonfiction interests. I read a fair amount of books on the usual science and history topics. This one gave me a whole new perspective.

We’ve all wondered how astronauts pee. Right? Well Mary Roach will answer this question in SO MUCH DETAIL you may regret asking it (except not really). Roach examines how limited gravity, oxygen, and cabin room affect the people we send to space and takes us through a history of space travel at the same time.

Packing for Mars is highly entertaining, informative, and definitely worth a read.

The audiobook was fine. Sandra Burr was a good narrator. But she just couldn’t capture Mary Roach’s voice and her sense of humor. I listened to the audio because that was the only way I could finally get to it, but I’d probably recommend trying the print if you can.

AND…to help facilitate that, I actually have a signed ARC (I know, I’m horrible to have waited this long) to give away. If you’re interested in reading this one, just fill out the form below to enter the giveaway (or click here to fill out the form here if WordPress doesn’t want to embed this properly). 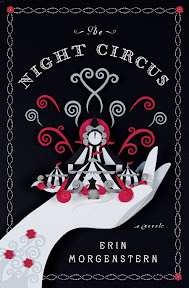 Le Cirque des Rêves appears without any notice. Black and white tents with unbelievable wonders within. Night after night the patrons return until the circus departs as suddenly as it appeared.

Celia and Marco are bound to a competition neither of them understand. Le Cirque des Rêves is their venue, but too many people have unwittingly become part of it.

Bailey watched the circus from afar as a young boy. When it returns, he meets a young girl who gives him a white glove. Years later, he searches this girl as his future stands before him.

The Night Circus has been called “the next Harry Potter” by too many sources to name. This is entirely misleading. It is neither young adult nor a series, and the only thing the two tales have in common is an element of magic. But it is so, so different. The Night Circus is worthy of praise in its own right, praise does not involve such comparisons.

The Night Circus is enchanting. Celia and Marco’s long story is woven in between Bailey’s, which takes place some 16 years after Le Cirque des Rêves opens.  The stories slowly unfold, but there is a sense of desperation as the two storylines begin to converge.

This is not a mere tale of magic. It is a story of love, friendship consequences, and destiny. And the writing is delightful and just as enchanting as the story.

Doubleday has been generous enough to provide an advanced reader’s edition to one lucky person. To enter, fill out the form below. 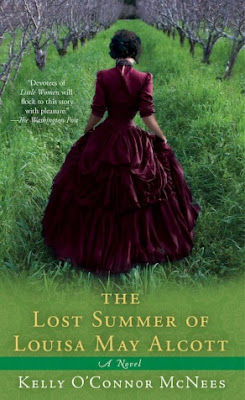 Today is your lucky day. Well, for two of you. I am giving away TWO copies of The Lost Summer of Louisa May Alcott by Kelly O’Connor McNees. You may remember me telling you to read this book when it was released last year. Well, today it comes out in paperback. So even if you don’t win the giveaway, you should probably just go buy it (and follow Kelly on Twitter – she is entertaining).

I will use Random.org to pick the winners. Thanks to the folks at Berkley (Penguin) for making this giveaway possible.

I think I may be late on this one so here is the winner of The Everlasting Now (graciously provided by Peachtree Publishers). I used random.org to pick one entry and the winner is:

Congratulations, Margie! Look for an email from me shortly.

It is time to announce the winner of the Suite Scarlett audiobook giveaway.  I used random.org to pick one entry and the winner is:

Congratulations Lindsey! Look for an email from me shortly.

You still have time to enter another giveaway going on here at my books. my life. Enter to win a copy of The Everlasting Now here.

First of all, I love the title of this book. And a good title will at least get me to pick up a book and see what it’s about.   Luckily, this book lived up to it’s title.

Quick summary: It’s the middle of the Great Depression and James Longstreet Sayre, or “Brother” (this book is full of great names), lives with his mom and little sister in their boarding house in small-town Alabama. He loves trains, hates the sheriff, and like all 12-year-old boys, adores Joe Louis. The book takes place during the eventful summer the cook’s nephew, Champion (as in Champion Always Luckey – I told you there were awesome names), comes to Alabama from Detroit and, as Brother puts it, changes his life.

I read a fair amount of middle grade novels, but almost all of them are written for girls, so it was an interesting change to read The Everlasting Now. This book is a wonderful description of 1930s life in the South. It has hobos, boxing, and racial tension. It touches on the difficulties of living during the Depression, the effects of segregation, and the power of friendship and hope.

I find myself being drawn to Southern fiction lately and with each book I read, I continue to discover how enjoyable it usually is.

Peachtree Publishers has graciously provided me with a copy to giveaway. To enter, fill out the form below by midnight EST on July 15. I will pick a winner from random.org. The contest is open internationally.

Check out the other Peachtree Publishers books on tour!

I meant to include a giveaway of Suite Scarlett with my review yesterday, but I guess my brain is still a little sleep-deprived.

While I did enjoy listening to Suite Scarlett, I doubt I’ll be listening to it again, so I thought I would end audiobook week by passing it on to one of my readers.

NOTE: Keep in mind that this is an MP3-CD.

As much as I love making you leave something interesting in the comments for contests, the google form makes my life much simpler. So IF YOU’D LIKE TO (it is not required), please tell me what your favorite audiobook is in the comments.

Not to shabby by my standards.  Especially considering how busy November ended up being for me.

And the best news? I didn’t buy or otherwise acquire any books this month.  I guess I’m saving up for the Christmas haul.

Finally, it’s time to announce the winner to my Confessions of a Jane Austen Addict giveaway.  First let me say that I really enjoyed reading all of your responses and hearing what you all would do if you suddenly woke up in Regency England. I used a random number generator to pick the winner, and that person is:

Send me an email with your address and I’ll send you your book.  If I don’t hear from you by December 15, I’ll pick another winner.

I finished Confessions of a Jane Austen Addict by Laurie Viera Rigler (my third item for the Everything Austen challenge) this week.  Here is the blurb from the publisher:

After nursing a broken engagement with Jane Austen novels and Absolut, Courtney Stone wakes up to find herself not in her Los Angeles bedroom or even in her own body, but inside the bedchamber of a woman in Regency England. Who but an Austen addict like herself could concoct such a fantasy?

Not only is Courtney stuck inside another woman’s life, she is forced to pretend she actually is that woman; and despite knowing nothing about her, she manages to fool even the most astute observer. For her borrowed body knows how to speak without slaying the King’s English, dance without maiming her partner, and embroider as if possessed by actual domestic skill.

But not even Courtney’s level of Austen mania has prepared her for the chamber pots and filthy coaching inns of nineteenth-century England, let alone the realities of being a single woman who must fend off suffocating chaperones, condom-less seducers, and marriages of convenience. Enter the enigmatic Mr. Edgeworth, a suitor who may turn out not to be a familiar species of philanderer after all.

Confessions was a nice, quick read.  I didn’t love it, but I did enjoy it (I really wanted to love it since I planned on doing a giveaway, but it is what it is).  The first-person narrator took a long time to get used to (I don’t like being stuck in people’s heads), but the idea is interesting.  How many of us Austen fans have not dreamed of living in Regency England and attending balls, being courted by rich suitors, and traveling to Bath.  But in these fantasies, have any of us considered the harsg realities – how do you bathe? what happens when you get your period? how are you treated when you are sick?  These are the things Courtney experiences (along with the balls and the suitors and Bath).  It made me glad that I can sit in my 21st century apartment reading about Jane Austen’s era instead of actually experiencing it.

And now for the giveaway!

Since Everything Austen is all about the giveaways, I will be giving away my copy of Confessions of a Jane Austen addict to one lucky winner.  All you have to do is leave a comment below saying one thing you would do (or dread doing) if you woke up in Regency England.  For an extra entry, tweet about it or mention it in a blog post and let me know.  The contest will be open until the end of the month (Midnight EDT November 30) and is open to international readers.  I will announce the winner in my November Books post.  Good luck!