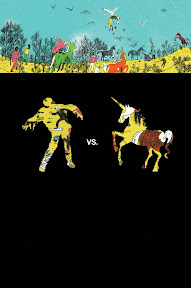 Zombies vs. Unicorns is pretty much as awesome as it sounds. A bunch of the big YA authors of the day have contributed stories to help settle the eternal debate over which creature is superior: zombies or unicorns.   You can read all about the debate here.  Instead of doing a normal review (my normal review = definitely read this because it is wildly entertaining),  I am  tackling the stories as if they were head-to-head matchups and declaring a winner. Scroll down to see who wins.

Thoughts: The first story, about a princess who calls upon a unicorn to help her dead/dying mother, is alright. But I loved Johnson’s story about a semi-cured teenage zombie who falls in love with his intended prey (described as similar to the best mac and cheese you’ve ever had talking to you about your favorite music). There was something so tender about it that you forgot you were cheering for a brain-eating creature.

Thoughts: I thought Team Unicorn had a chance with this one. Novik’s story about a modern girl on a mission to rescue baby unicorns is hilarious. But then I read Ryan’s not-so-hilarious story of a dictator’s daughter living on the island of Curacao and attempting to avoid the zombie revolution that has taken over the world. Ryan managed to pack so much into a 30-page story that I am still thinking about it.

Thoughts: I may be predisposed to like anything that Maureen Johnson writes because I think she is about as entertaining as people get, but her story was much more to my taste in this matchup. Lanagan’s story is about…this is a tough one to describe…a boy wrongly accused, a midwife subjected to an unnatural birth, a woman in love with a unicorn. While Johnson’s story is just about a girl who finds herself in a the house of a famous celebrity taking care of her zombie children. Very funny.

Thoughts: Diana Peterfreund’s story of killer unicorns and the one girl who could stop them (think Buffy) was touching. It had religion, internal conflict, and some old fashion teen romance. Also, there is a baby unicorn. Westerfeld tells the story of a small band of people fending off the 6 billion “Zees” in the world and one young girl’s solution to their boredom. Both of these stories had interesting takes on their subject matter, but I have to give Team Unicorn its first win.

Thoughts: “The Third Virgin” is a tale of a 500-hundred year old unicorn who can heal people and also steal part of their lives. This unicorn is out to seek a true virgin in need – the only type of human he can communicate with. It was an interesting story but it had too much baby killing in it for me. Libba Bray’s eerie story takes place in a town where all of the adults are gone due to the zombie infection and the teenagers are left to rule. And there was less baby killing. So it wins.

If you’d asked me which side I was on before I began this book, I would have said Team Unicorn. Because I thought I didn’t really liked zombies. Turns out I do. A lot. Team Zombie, FTW!

Now seriously, you should probably go read this book. But if you need more convincing, I leave you with this book trailer.