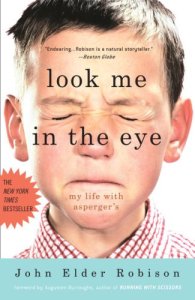 I picked up Look Me in the Eye: My Life with Asperger’s by John Elder Robison because I was in the mood for a memoir and this is one of the few I hadn’t read on our shelf.  It was very enjoyable and just what I wanted.  Robison was a very good storyteller and his unique perspective made his stories even more interesting.  I thought the book would focus mostly on Asperger’s and how it affected his life, but instead it was just a memoir about someone who happened to have Asperger’s.  There were many times that I completely forgot about the Asperger’s and remained fascinated with Robison’s amazing life story.

Now that I think about it, that makes sense.  Robison didn’t know that he had Asperger’s until very recently.  He spent his whole life knowing he was different, but not why.  So his story is just his story.  If he’d known he had Asperger’s, then it would probably have played a more prominent role.

In college, one of my favorite classes was a course focused entirely on deviant behavior.  We studied the history of psychology and the DSM and how “abnormal behavior” is viewed differently over time.  For example, homosexuality used to be considered a psychological disorder and now we accept it (or should accept it) as normal.  This book often reminded me of this class because Robison was treated as a deviant during his childhood and adolescence.  Asperger’s didn’t exist yet as a diagnosis, so no one could have known why he acted the way he did.  A kid in his situation now may have an easier time growing up simply by being born 40 years later.

I never got around to Running with Scissors by Auguston Burroughs (Robison’s younger brother), but this book has sparked my interest and I will once again place it on the neverending TBR pile.