I also have memories of you that don’t include you, memories of the two of us that you won’t know about at all. When you are such a strong presence in me that your absence is almost imperceptible. It’s the imprint of you on the sand of me, the silent melody that your existence leaves in me. p. 186* 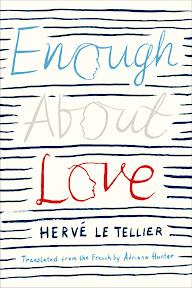 Enough About Love is the story of two married women having affairs. Anna and Louise do not know each other but their stories overlap and they their new relationships begin at about the same time. They both fall in love with men who are not their husbands and we catch glimpses of the relationships – both with these new men and with their husbands – in a series of vignettes.

Although it has been translated, this book still feels very French. It didn’t seem to lose anything in the translation. I still felt the emotion flowing throughout the novel as I read. I felt the struggles that the characters felt.

The first chapter tells the story of one of the “other” men, Thomas, and how he grew up, what he was like when he was younger. But it does so in a detached and cursory manner so that I felt like I was watching the opening scene of a movie where the narrator explains why a character is who he is (think 500 Days of Summer). This introduction got my attention from the beginning of the book.  And although the book begins with Thomas, I felt it is really the women who are the main characters, so it was a bold way to start the story.

Le Tellier plays with language throughout the novel. By shifting from vignette to vignette, the author is free to try new things. For example, in one section, he has a character talking over another character’s poetry reading. He does this by using side by side columns. While Character A reads the many meanings of the french word for foreigner (and boy did the translator do a good job here), Character B has a stream of consciousness discussion with himself.

Enough About Love is for people who appreciate what we can do with language on top of a good story. I want to leave with you my favorite lines/passages so you can get a taste of the language:

They discuss politics and literature, row about Proust, Althusser, Trotsky, and Barthes, his vehemence in proportion to his ignorance of the texts. When he comes to read them properly, later, he will blush as he remembers the idiocies he uttered, and marvel at the impunity of his imposture. p. 8

Thomas Le Gall sometimes has his doubts about the philosophy of language, but having doubts about philosophy – whether or not it has to do with language – surely that in itself is truly philosophy. p. 113

With that one gesture your little girl is giving me permission to exist, and her tiny hand is offering me a position that it alone has any right to grant. p. 184

We got down the steps into the conservatory, with Lea between us skipping and laughing. Thanks to her, we are side by side for the first time. p. 186

*Page numbers refer to the egalley edition and may differ in the published novel.