Today it is my turn to host Carlene Bauer’s memoir, Not That Kind of Girl on its TLC Book Tour. Thank you to TLC Book Tours and Harper Perennial for the opportunity. Check out TLC’s other tours here. 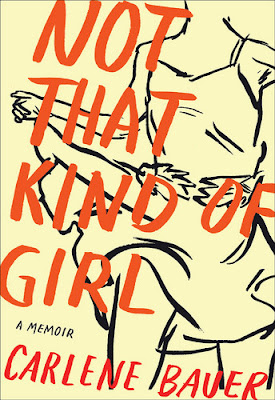 Raised in evangelical churches that preached apocalypse now, Carlene Bauer grows up happy to oblige the God who presides over her New Jersey girlhood. But in high school and college, her intellectual and spiritual horizons widen, and she becomes skeptical of the judgmental God she’s been given. Still, she finds it hard to let go of the ideals she’s been raised with, and to rebel as she knows she should. She loves rock and roll, but politely declines offers of sex and drugs; she thinks the Bible and the Norton Anthology of American Literature are equally authoritative guides to life. Since there are no churches worshipping the Jesus Paul Westerberg sang about in “Can’t Hardly Wait,” and no tidy categories for those who are neither riot grrrls nor altar girls, she hovers between a hunger for the world and a suspicion of it.

In her twenties, however, determined to make up for lost time, Bauer undertakes a belated and often comic coming-of-age in New York City. Between late blooming at parties and staying late at work, it seems that she might become as bold as she’d hoped to be—even if the late blooming is a little more hapless than highly erotic. And yet the city and its pleasures do not distract her from another hope: that she might learn how to have a faith that she can truly call her own. Enter the Catholic Church, and a conversion. But then she falls in love, and loses her religion—which leaves her wondering just what it means to be good.

Sharply written, hilarious, and touching, Not That Kind of Girl is the story of one young woman’s efforts to define worldliness, ambition, and love on her own terms—while believing in, among other things, The Smiths, Virginia Woolf, and the transformative power of New York City. Fellow restless seekers will find solace in Bauer’s struggle to create meaning in the face of overwhelming doubt, and fall in love with the highly original voice at the center of this unforgettable debut.

I wanted to love Not That Kind of Girl. I asked to be on the tour because it sounded like a book I could adore. I enjoy memoirs. I enjoy reading about struggles to find religion (having struggled with it my entire adult life). Bauer’s upbringing, very different from my own Catholic childhood, seemed interesting.

But I didn’t love Not That Kind of Girl. I didn’t even finish the book. I really struggled with that decision. I asked to be on this tour. I said I would review it on a certain date. And here I was, two days before that date and only on page 87 after a week of reading. I was persuaded by a friend that writing a Did Not Finish review was a valid option, so here it is: my honest, and – I hope – fair, DNF review of Not That Kind of Girl.

I think my problem with Not That Kind of Girl is simply that it was not what I was expecting. Bauer is good writer. She just lost me in the way she chose to tell the story.

I failed to connect with Bauer. I’m used to memoirs with strong emotions and this one had a bit more distance to it. I felt like the memoir (or at least the first third of it) was simply a recitation of which schools and which friends she had. I got lost in the friends – I couldn’t keep them straight. I wanted more of the religious story. I wanted to experience her life as a conservative christian child. I wanted to experience the struggles she faced with that identity as she grew up (I realize this may come later and I just didn’t read far enough). I left off during her first year of college. She wasn’t drinking or having sex yet but she didn’t really seem to be struggling with those decisions which must have been unpopular. Things just happened to her and around her and she explained them.

One thing I did like about Not That Kind of Girl was all the references to music. Music was a huge part of Bauer’s life and she obviously ties certain life experiences to certain songs and artists. I can appreciate a girl with such strong ties to music.

I am positive that others will like this book and I see its potential. These thoughts are very personal to my reading experience. Please go read the other reviews for this tour so you can see what everyone else thought. And I’d be happy to pass on my copy to someone who thinks they may like it.

4 thoughts on “Not That Kind of Girl [DNF Review]”